Dextroamphetamine Side Effects and Warnings

Dextroamphetamine is an Amphetamine

Dextroamphetamine is a stimulant drug known to increase wakefulness and focus, decrease fatigue and eliminate the desire to eat.

Generic names for the drug include:

All the following brand-names contain dextroamphetamine:

DEA Schedule II Control Substance means this drug has a “high potential for abuse” that “may lead to severe psychological or physical dependence,” and the federal government sets limits on the amount that may be manufactured each year.

The Food and Drug Administration (FDA) requires the following “black box” warning on all amphetamine drugs, including dextroamphetamine, which means that medical studies indicate dextroamphetamine carries a significant risk of serious, or even life-threatening, adverse effects.

Because dextroamphetamine can so be very effective (and addicting) it became widely popular in the middle of the last century. The psychiatric drug became famous as “uppers” and diet pills as drug-makers advertised the addictive chemical as a wonder-drug while disregarding its dangerous side-effects.

In the 1950s, drug-makers advertised Dexedrine as a “wonder-drug” while disregarding its dangerous side-effects. 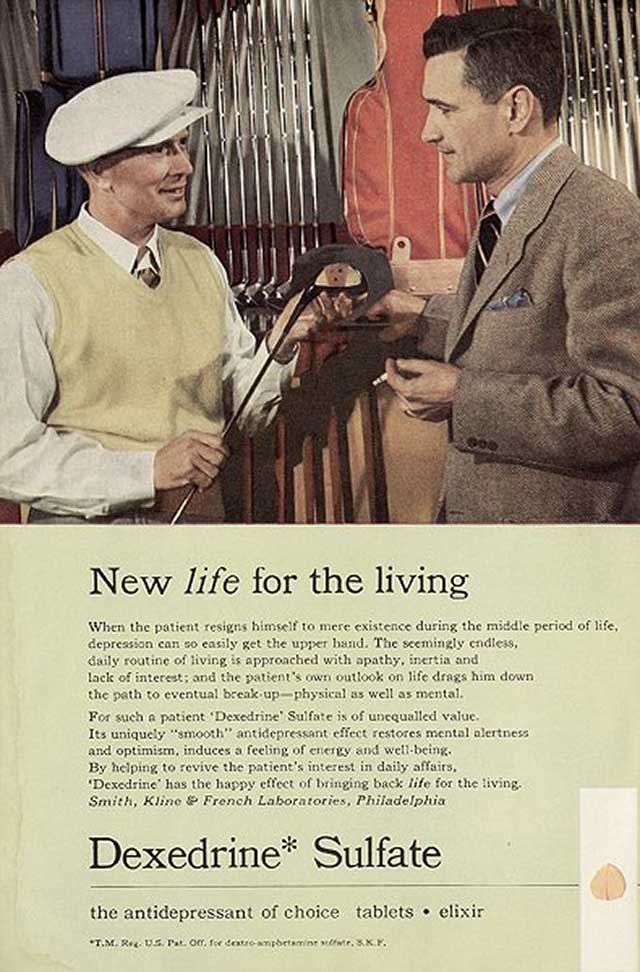 ABOVE: “Dexedrine's uniquely 'smooth' antidepressant effect restores mental alertness and optimism, induces feeling of energy and well-being... Dexedrine has the happy effect of bringing back life for the living.” (Magazine advertisement circa 1950, Smith Kline & French; GlaxoSmithKline.) 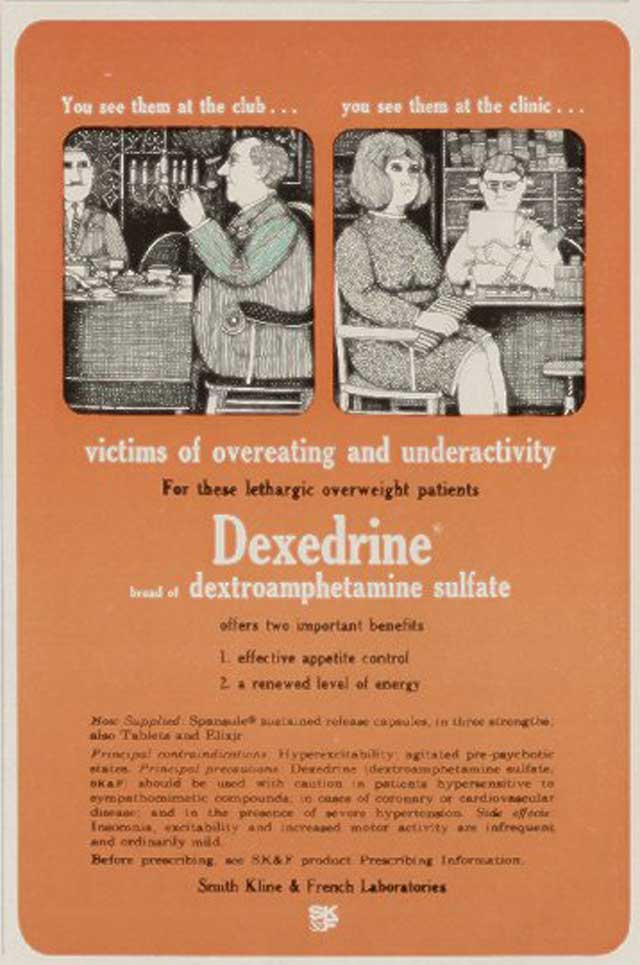 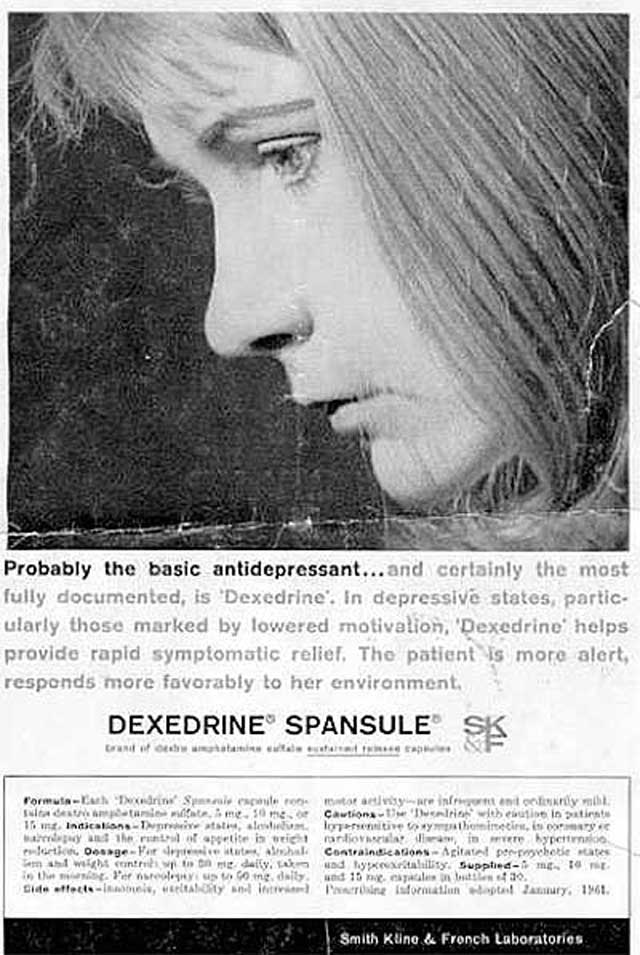 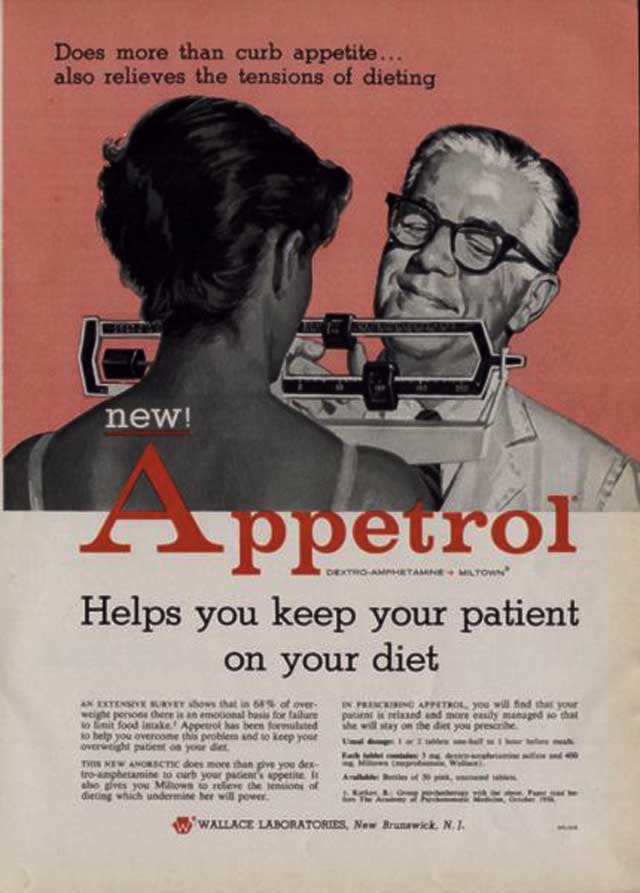 ABOVE: “Does more than curb appetite...also relieves the tensions of dieting.” (Magazine advertisement circa 1959, Wallace Laboratories.)

As use of the addictive chemical spread, so did its abuse, according to the U.S. Drug Enforcement Agency (DEA) in a 2005 report. Referring to dextroamphetamine, methamphetamine, and all the amphetamines, the DEA states:

In the 1960s, amphetamines became a perceived remedy for helping truckers to complete their long routes without falling asleep, for weight control, for helping athletes to perform better and train longer, and for treating mild depression. ... With experience, it became evident that the dangers of abuse of these drugs outweighed most of their therapeutic uses.

Increased control measures were initiated in 1965 with amendments to the federal food and drug laws... Many pharmaceutical amphetamine products were removed from the market including all injectable formulations, and doctors prescribed those that remained less freely. Recent increases in medical use of these drugs can be attributed to their use in the treatment of ADHD.

How Does Dextroamphetamine Work?

Dextroamphetamine (as with all amphetamines) works by by initiating the acute stress response (“fight or flight” response). The central nervous system prepares the body for physical action by creating physiological changes as if it were stressed or under threat. These changes include:

Small doses of dextroamphetamine can banish tiredness and make the user feel alert and refreshed. However, the burst of energy comes at a price. A “speed crash” always follows the high and typically leaves the user feeling nauseous, irritable, depressed and extremely exhausted.

According to the DEA the effects of amphetamines are similar to cocaine but the onset is slower and the duration is longer. Chronic abuse produces a psychosis that resembles schizophrenia and is characterized by paranoia, picking at the skin, preoccupation with one’s own thoughts, and auditory and visual hallucinations. These psychotic symptoms can persist for months and even years after use of these drugs has ceased, and may be related to its neurotoxic effects.